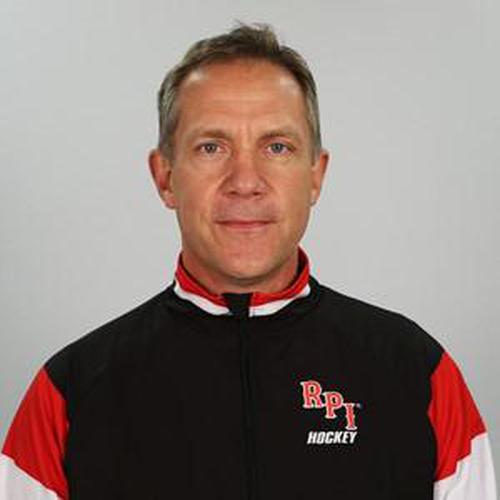 Dave Smith was introduced as the head men's hockey coach in April of 2017 after spending 12 years as the head coach at Canisius College.

The 2019-20 season was the best for the Engineers in several years as they earned 17 wins (17-15-2), including in each of their last four contests, captured the Mayor's Cup and garnered a bye through the first round of the ECAC Dave SmithHockey Playoffs following a fourth place finish (13-8-1). RPI never got the opportunity to play in the post-season because the tournament was called off due to the COVID-19 pandemic.

Numerous student-athletes earned post-season league recognition, including Will Reilly, who was All-League before signing an NHL contract with the Pittsburgh Penguins. Smith himself was a finalist for ECAC Hockey Coach of the Year.

Highlights of his time with the Golden Griffins include three straight trips to Atlantic Hockey Championship weekend - the first time in school history - consecutive appearances in the title game and the team’s first crown in 2013.

During the 2012-13 campaign, Smith guided Canisius to the program’s first conference title with a 7-2 victory in the Atlantic Hockey Championship game and the team’s first appearance in the NCAA Division I Tournament. The Griffs finished 19th in the final USCHO.com national poll, marking the program’s highest finish in the national rankings.

Throughout Smith's tenure with the Griffs, the hockey program consistently had the top GPA of any team at Canisius, including a 3.31 cumulative mark following the 2015-16 academic year.

Prior to his time at Canisius, Smith was an assistant coach at Bowling Green and Miami, where he coached or recruited two Hobey Baker Award finalists, four Players of the Year, two Rookies of the Year, 22 all-league award winners and three Terry Flanagan Award winners for perseverance. The Arthur, Ontario, native was also instrumental in guiding Mercyhurst to two league championships and two NCAA Tournament appearances in three seasons.

Smith graduated from Ohio State University in 1992 with a Bachelor’s in journalism/public relations. He was a four-year letterwinner, a captain as a junior and the team’s MVP as a senior when he led the Buckeyes with 41 assists and 63 points. He finished his career with 140 points, ranking 14th all-time.

Smith spent six seasons in professional hockey, primarily in the International Hockey League, where he was part of a 1993 Turner Cup Championship with the Ft. Wayne Komets, and the American Hockey League, with a brief period in the East Coast Hockey League. He was under contract with the New York Rangers in 1994-95.

He has spent his summers coaching young players and adults as a director and head instructor at numerous camps across the United States and Canada.

He and his wife, Susan, have two daughters, Ellis and Kylie. Dr. Susan Smith is a lecturer in the Cognitive Science department at RPI. Ellis graduated from Manhattanville College with a double major of Psychology and Sport Studies and is currently completing her master’s degree in Applied Behavior Analysis from Columbia University.  Kylie graduated from Nazareth College with a degree in Occupational Therapy and is currently completing her Masters in Occupational Therapy, also from Nazareth College. Both daughters were student-athletes, competing in ice hockey and softball, respectively.